STM, ‘ThinkTech’ will collaborate with the scholars, foundations, universities and hi-tech companies, public enterprises and decision makers for prediction developments and strategic solutions.

STM has achieved to evolve its experience and accumulation of knowledge in the areas of engineering, technology, and consultancy into a synergy using its human resources to finding “ThinkTech”, Turkey’s first technology-based center of thought in November 2017. STM realized the launching of “ThinkTech” utilizing a panel organized in Ankara. The panel titled “The Prior Defense Systems and Technologies of the Operational Environments shortly” was debated by the participation of Prof. Dr. Ismail Demir who is Undersecretary for Defense Industries and Davut Yilmaz who is General Manager of STM pointing forward the target of ThinkTech to become o regional and global center of thought.

Simultaneously, ‘STM ThinkTech’ organized its second panel “The New Soldiers of a Digitalising World: Unmanned and Intelligent Systems” in Ankara.  During the event, topics like artificial intelligence transformation in defense industry, unmanned platforms and intelligent robots of the future were discussed by the participants Prof. Dr. Ismail Demir  Undersecretary for Defense Industries; Lieutenant General Yavuz Turkgenci Head of  Plans and Policies Department at the Turkish General Staff, HQ and Prof. Dr. Gokhan Inalhan Faculty Member and Deputy Head of the Department of Aeronautical Engineering at  Istanbul Technical University and was moderated by Hakan Celik author, and journalist. 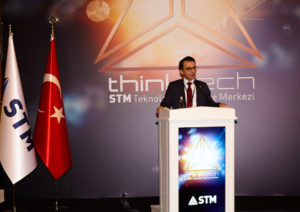 The event was opened with the remarks of Davut Yilmaz. He indicated that “STM is aiming to take over new roles in the development of Turkey’s new generation local and national defense industry. We now have entered a new era of a fast digital transformation in the defense industry. The implementation of robotic technologies in military environments started with the drones, and unmanned systems have already developed prevalently. Such systems are widely used in operational duties like reconnaissance, surveillance, armed patrol, precision-guided attacks and search and rescue operations. As STM, we regard the significance of discussing unmanned and smart systems, their operational roles in future environments and their developments supported by stimulating ideas will open new horizons”.

Prof. Dr. Ismail Demir expressed that “These new generation robotic systems are the main strategic capabilities which every strong army should possess to combat terrorist threats and future battles. Such unmanned and smart systems will enter the environment before the soldiers to record visions for security intelligence purposes as well as carry on operational duties like close supporting fire, ammunition transfer or tactical operations to distract the attention of the enemy. The new generation national unmanned intelligent systems will empower and support our military, naval and air forces. He also indicated; “to energize the brainpower and capabilities of our Country is the security of our future.”

The Future of Engine Maintenance With Robots