The share transfer of TEMSA, a leading global bus and coach manufacturer, has been finalized. TEMSA, which quickly captured a nearly 10 percent share in the motorcoach industry in the U.S. market, will continue on its path while raising its export targets. With the share transfer agreement formally finalized between Sabancı Holding and Swiss-based True Value Capital Partners, TEMSA will move forward under the leadership of its new investor.

Evren Ünver, representing True Value Capital Partners, visited the TEMSA plant in Turkey following the completion of the sales transactions. During his visit, Ünver addressed TEMSA employees and said that the next era will be the start of a new growth period for TEMSA.

Speaking during the introduction meeting at the plant, TEMSA CEO Hasan Yıldırım said, “We are grateful to all of our business partners and colleagues for making TEMSA what it is today. One out of every three buses in Turkey is manufactured by TEMSA, which has exported over 15,000 vehicles to 66 countries to date. With a total of 5,000 buses and coaches in France alone, TEMSA’s presence in Europe spans important markets that include Germany, the U.K., Italy, Austria, Sweden, Lithuania and the Benelux countries. TEMSA currently has three electric models ready for serial production: the 9-meter ‘MD9’ and the 12-meter ‘Avenue Electron’ and ‘Avenue EV’.

“Now it’s time to create the TEMSA of tomorrow. Our new investor, True Value Capital Partners, will spearhead this journey. We can’t wait to walk hand in hand with our new investor on this exciting path. TEMSA is a leading international automotive brand, with over half a century of experience in manufacturing coaches, buses and minibuses, and we will move forward as an even bigger and stronger company. TEMSA is among a handful of automotive companies worldwide to offer multiple electric model options. As our company contributes to the transportation of the future with smart, autonomous and electric vehicles, we will continue to shape the future of the mobility industry as well.” 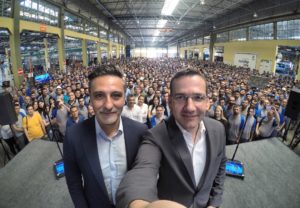 Over 15K TEMSA Vehicles on the Roads of 66 Countries

The TEMSA plant in Turkey has an annual production capacity of 11,500 vehicles, including 4,000 buses, coaches and midibuses and 7,500 light trucks. TEMSA has exported over 15,000 vehicles to 66 countries to date. With a total of 5,000 buses and coaches in France alone, TEMSA’s presence in Europe spans important markets that include Germany, the U.K., Italy, Austria, Sweden, Lithuania and the Benelux countries. Over 1,100 TEMSA branded vehicles are on North American roads and we aim to take the current market share in motorcoach industry of nearly 10 percent to higher levels with TEMSA North America.